The ICCHP is an award winning Hypnotherapy Training Course provider based in London UK. We offer you a range of learning and study options including both online hypnotherapy training and classroom based hypnotherapy practitioner courses. We teach you to become a confident, competent and safe hypnotherapy professional. Throughout your learning, you will be fully supported as you acquire new hypnotherapy skills. Your tutors are practising clinical hypnotherapists, with a wealth of clinical experience to share. ICCHP hypnotherapy training tutors also teach medical professionals and post-graduate students. ICCHP students learn how to make a difference in their lives as well as the lives of others. Check out the ICCHP training course reviews to hear what our students have to say about their experience of our classroom and online courses. Our fully certified hypnotherapy training courses incorporate all hypnotherapeutic approaches including Direct Suggestion - Indirect/Conversational (Ericksonian) - Behavioural - Psychodynamic - Advanced Hypnopsychotherapy - Integrative - Evidence Based and Rational Emotive Cognitive Behaviour Hypnotherapy. Altogether, offering among the most comprehensive range of professional, certified hypnotherapy courses available worldwide. With study options designed to suit our students, we provide a modern, dynamic, flexible approach to learning to be a hypnotherapy practtioner. Students start their hypnotherapy training journey with the PCHyp Certificate course and then progess onto the more advanced PDHyp Diploma course. If you want to become a fully recognised hypnotherapy practitioner in the UK, then these two courses are a must.

The PCHyp is undertaken both digitally online and in the classroom. Upon completion, clinical practice can be commenced under the supervision of a clinical supervisor or mentor. With a PCHyp, you will be able to practice as a ‘student’ practitioner of hypnotherapy, as a student member of the GHR and/or IHR. You are also eligible to take the advanced PDHyp course to expand your hypnotherapy horizons, which most students go on to do.

Completion of both the Practitioner Certificate (PCHyp) and Practitioner Diploma (PDHyp) enables full professional registration with the UK General Hypnotherapy Register (GHR) and the UK Complimentary and Natural Healthcare Council (CNHC), which is recognised by the UK Department of Health (DOH) and the UK National Health Service (NHS) and General Medical C|ouncil (GMC). Graduates are also eligible to become members of the International Hypnotherapy Register (IHR) and the International Association of Counselors & Therapists (IACT). Graduates are also able to become members of the National/International Council of Psychotherapists (NCP/ICP). 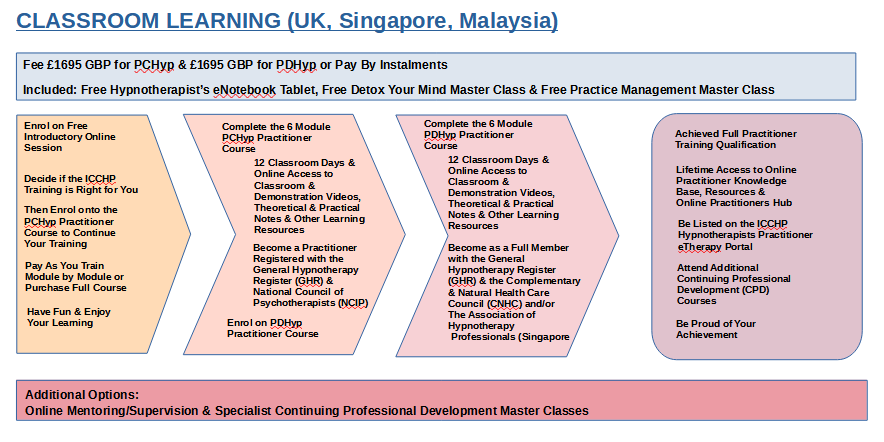 As an award winning hypnotherapy training course provider, we are offering new students who enrol on any of the classroom or online hypnotherapy practitioner courses an extra special bonus! All enrolling students will also receive:

Want to Upgrade Your Training?

Already Trained as a Hypnotherapist? Lacking knowledge and skills? Existing hypnotherapy practitioners looking to upgrade and update their existing qualifications can take advantage of up to 50% discount off our usual hypnotherapy course fees - Contact Us for More Details

The ICCHP classroom venue in London is Pimlico Academy, in the heart of Westminister. The Academy is sponsored by Future, a local education charity, which the ICCHP and our students are proud to support. Our hypnotherapy training venue offers free parking around the venue and is within walking distance from Pimlico and Victoria Underground/Rail stations. Pimlico Academy, Lupus Street, London, SW1V 3AT.

Pimlico is an upscale residential area with quiet streets lined with stately 19th-century homes. Its many hotels, plus proximity to the Tate Britain gallery and stylish Chelsea, make it popular with travelers, while post-work crowds frequent the chic restaurants and old-school pubs by busy Vauxhall Bridge Road. St. George’s Square Garden has views of the River Thames, and joggers follow the waterside Thames Path.

Dolphin Square is a block of private apartments built between 1935 and 1937. At the time of their construction the development was billed as the largest self-contained block of flats in Europe. It is home to many Members of Parliament (MPs).

Churchill Gardens is a large housing estate covering the south-west corner of Pimlico. It was developed between 1946 and 1962 to a design by the architects Powell and Moya, replacing docks, industrial works, and several Cubitt terraces damaged in the Blitz.

On Buckingham Palace Road is the former "Empire Terminal" of Imperial Airways. This is a striking Art Moderne building designed in 1938 by architect Albert Lakeman. Mail, freight and passengers were transported from the terminal to Southampton via rail before transferring to flying boats. The building now serves as the headquarters of the National Audit Office.

The area contains a number of attractive Anglican churches, most constructed at the time the neighbourhood was laid down. Among them are St Gabriel's (of which a former Vicar is now Archdeacon of Chichester), St Saviour and St James the Less. From its founding St Peter's, Eaton Square, Belgravia was usually recorded as St Peter's, Pimlico (at least prior to 1878). The area's Catholic church, Holy Apostles, was destroyed in the Blitz and rebuilt in 1957. The headquarters of the Catholic Bishops' Conference of England and Wales are located in Eccleston Square.

Tate Britain is located within the ward of Millbank, but is a short walk from Pimlico underground station and is regarded as a Pimlico landmark. The district's association with fine art has been reinforced by the Chelsea College of Art and Design's recent move to the former Royal Army Medical College next to the Tate.

Pimlico School, a comprehensive built between 1967 and 1970, was a notable example of Brutalist architecture. It was demolished in 2010.